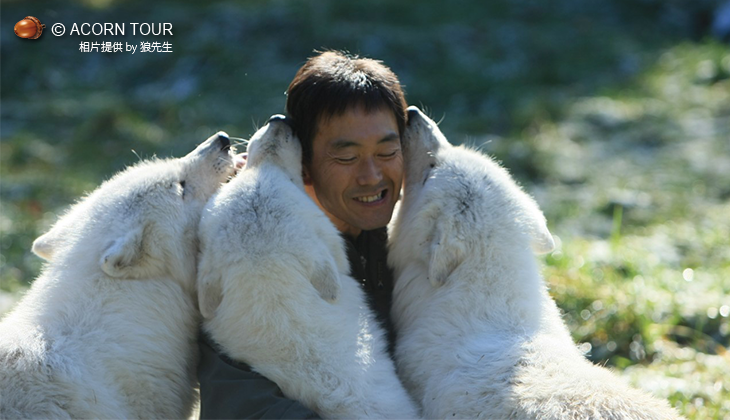 Mr. Wolf's idea is enlightening and teaching us to combine tourism with ecology.

Meet Mr. Wolf was an occasional chance who promotes wolves’ education of the ecology balance. This class cost a little expensive at first. Would be funny in this course? Would doze off in class? We could not reach him by phone call, e-mail for nearly 2~3 months when we had decided to take this class by curiosity. Finally, we got in touch with him. The reason why we could not reach him that most of the time Mr. Wolf hunted with his partners of wolves in the forest. Afterward, we also got new knowledge unexpected in this class and had a correct thought for ecology. His idea is enlightening and teaching us to combine tourism with ecology.

Mrs. Wolf is his biggest support, also loves animals. He can promote his idea without any worries and focus on taking care of these semi-wild animals.

Once Mrs. Wolf was playing with a semi-wild eagle, which was being affectionate to her. Mr. Wolf would like to join them, and as a result the eagle suddenly shouted and hurt Mr. Wolf's face. The eagle was not friendly to Mr. Wolf at all because Mrs. Wolf this the person that the eagle wanted to get close to. It's a tough way for the promotion that takes a lot of money and time in a lifetime

Actually, they can live comfortably such as eating steaks and drinking wines, instead of eating venison, ravens and drink water, said Mr. Wolf. In fact, the coyotes have already been extinct in the local forest for a long time age. Mr. Wolf negotiated with the government that introduced species of Mongolian wolves and arctic wolves from foreign, even went to Mongolia. Hope the wolves can survive in this forest by released semi-wild way. There was only a Mongolian wolf's specimen in his classroom. We curiosity asked why there was a one. He said this one was his favorite and got closest, however, this wolf was the most rebellious who often fight with him.
(PS：No matter which animals, as like humans, each of them has their spirituality and different personality.)

(PS：Such a moment, it had been a memory.)

Although, there is no one of young people would like to take over Mr. Wolf's promotion of ecology education as so far. This still is an uncompleted mission, however, he will continue to promote this class.

Mr. Wolf is the few of people who can interact with others wolves by howling. Once we would like to hear a howling between him and the wolf. Mr. wolf shyly said, this wolf has already too old to howl.

"Howling" is lengthened the last syllable.

[1] The dog is the cartoon of Japan's comic book - Bow Wow, which features is what the dog makes the sound.

I also intended to bring some packs of the wolf's favorite snacks (It's dried anchovies.) to the wolf in the next year. However, the wolf became an angel the next Spring.

Wolves lose their old hair slowly before the winter and grow out the new hair in winter in that their fur is highly resistant to the cold.

A film which was an adaptation of a novel was about a wolf, which a young man came from a city and followed a wise elder herder. This young man caught a wolf cub who escaped being hunt. He thought this could protect this wolf cub, on the contrary, this was forced foster. Wolves are not naturally tamed animals so that the elder herder advised the young man released this wolf cub.

Here was a serious said to the young man by the elder herder, “Wolves need the dignity of preying by themselves instead of being fed. They risk their life to prey because they are warriors. If you take away their pride which is like not let them hunt and let them learn afraid of death, then what kinds of warriors they are?”

Later, humans killed and chased wolves by the advantage of guns and cars. The last wolves were pushed to the edge and thus chose a dignified way to end their life such as buried alive by themselves in a cave or jumped the cliff and the last one exhausted by running.

Got it. Mr. Wolf took the wolves to hunt in the forest rather than feed them with fresh meat that the reason can not deprive the pride of them. Wolves' survival has dignity.

Wolves need the dignity of preying by themselves instead of the be fed.

Coyotes are distribution from North America to South America or the Arctic. They are adaptable because their size is half of the wolf also less eating. They are alone activity but hunt in bands. (Wolves distribute the food on average.)

They move into cities gradually because humankind has been damage to the environment. Most urban people do not know coyotes are quietly coming. Almost a thousand coyotes went into Chicago and New York by a research team discovered it. They prey on rats, rabbits and rummage the garbage bins while humankind is sleeping. Knowing to cross the roads and which ways of cars come from. Watched other coyotes die by trains and bus, therefore, they remember the train timetable to avoid the danger. It's amazing adaptable.

【Knowledge 4】What's the origin of dogs?

Researchers have noticed that there are maned wolves near a monastery in Spain. To put food at the door and wait for maned wolves to appear. Gradually, it becomes a routine.

Maybe that is what connects ancient humankind with dogs. (Wolf and dog are in the same Family.) Dogs entry human society about 33 thousand ago which they can hear the sound far away 500 meters that are 4 times of humankind.

Maned wolf is an endangered species they like quiet to prey (eat mice, small animals) also eat fruits. (Like foxes) They have only one mate for life, however, they do not often together.

Waiting for sharing the food with their mate until the food becomes cold, mice were cold too. (The soul is almost out-of-body.)

The Yellowstone National Park has realized the ecology environment unbalanced in America for 20 years ago. Now packs of wolves have been restored slowly successfully that after had introduced 14 wolves. Right now there are about 1500 wolves. Some ecologists have started the collection of the language of wolves by sound recording.
Howling of the wolf can reach 16 kilometers away by so far testing.

PS：Until now the record of the animal language has the dolphins' too. (e.g. Whistle register.)

Guess, who has the first courtship to a male or a female wolf?

The answer is,
Generally, the Male wolf has courtship first, however, there was an exception that a biologist found a male wolf had been courtship by four female wolves at the same time. Nevertheless, the male was not attracted by anyone.
The reasons maybe,
（1） Too handsome. （2）No idea to choose which one? （3）Mysterious? （4）actually, likes nine-tailed fox? （5）All of the above

All content published on this site that except the items shall not be the subject matter of Copyright Act that such as laws, orders, text of speeches, news releases and etc., please refer to the Article 9 provisions of Copyright Act the others all protected by Copyright Act including textual narratives, photography, pictures, sound recordings, images, and other information. No one may misappropriate, reproduce, transcribe, or distribute part or all of the content without the consent of the original author.