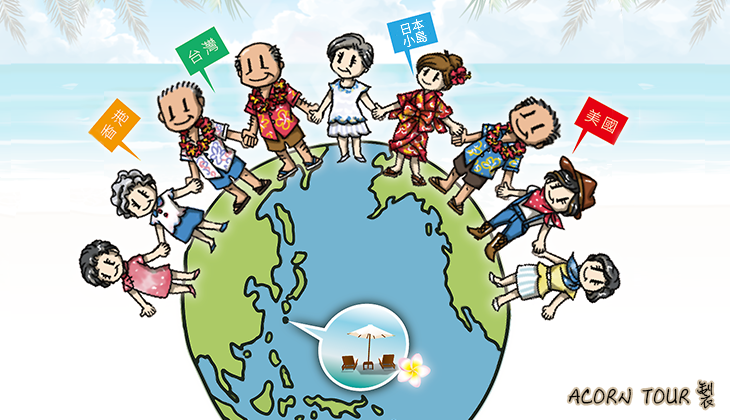 【地理】國境與邊界-第9篇：用一輩子在思念的旅行
【Geography】The Borders - Chapter 9:Travel that has been missed all the life

There are a few travel stories, ordinary but moving. The customers know their purposes for the tours. However, they were all so affectionate and moving from the beginning till the end. I was very curious about what they’d been moved by.

Travel that has been missed all the life.

We completed several traveling stories in the past few months, which were quite ordinary. The customers know their purposes for the tours. However, they were all so affectionate and moving from the beginning till the end. I was very curious about what they’d been moved by.

While I was planning the itinerary, I suddenly came up with an idea drawing their travel stories for them. I told my designer this idea, and she began to draw. Each picture had been revised no less than seven or eight times until matching how I imagined in my mind. Everyone started to be busy arranging the itinerary and thinking to get everything completed perfectly. We found a new goal for our job, and maybe this was one of the reasons why we really existed...

Soldiers, police officers, firefighters, rescuers, doctors, nurses save people; workers build houses and bridges and pave roads; teachers educate students; cleaning squads clean up the entire environment; all walks of life are doing their work to make the world a better place. But what does a travel agency do?

I used to think why travel existed, and even thought of giving up this job. Because apart from eating, drinking and having fun, showing off luxury brands, I didn’t see the meaning of travel...

Until the past few years, we have gradually found the meaning of our job. We should take the responsibility to promote those cultures and history in decline and the beauty of nature in the world. We should make these things interesting and acquaint people with them by travel, and gradually, people may start liking them, their mind and knowledge can be rich and content. Travel like this will make us get closer to those simple villages or traditional tribes. This is our task. We had no idea whether we could complete it, but we tried our best to do whatever we could.

So here comes another meaning for travel…

A younger sister who had been separated from her family lived on a small island in Japan. After decades, she was finally found and got in touch with her family. When all the sisters and brothers had already had many children and grandchildren, the reunion was quite hard to be arranged. The brothers and sisters living in Taiwan gathered in Taiwan first, and followed the one from America and Hongkong. Eventually, they headed to Japan together to meet their long lost younger sister. They’d been looking forward to this day for so long. It was going to be a very exciting and emotional moment. Would they cry and hug together when they met?

On the top of the earth, all the brothers and sisters are holding their hands like they were in childhood, standing in a row and full of joy. This was the picture we drew and gave them. This was a journey that they’d been missing for their whole life.

What was it like as a soldier in Kinmen, Taiwan 50 years ago? It was a long long time ago. We don’t really know what happened then very much. Although it is written in the history textbook, few of us really care about it.
The daughter knew that her father wanted to go back to Kinmen for many years, but he had to work so hard for his eight children. Years and years had passed, and more grandchildren were born.
The daughters had planned for many years to fulfill her Dad’s wish. However, the plan failed every time. This time the secret plan must be completed. They chose to go on National Day, which was an even more meaningful day.

Everyone was very worried about whether the dad enjoyed the trip. The daughters especially reminded that their dad didn’t like wordy people, waiting in line, and troubling others. He was a very traditional and responsible father, and the head of the family. And the father liked to buy a lot of things at once. Perhaps, it was because he was always afraid that there weren’t enough for his kids to share.

After overcoming all kinds of difficulties, the big family with loads of children and grandchildren finally set off.

It turned out that everyone’s worry was superfluous. Father was immersed in his memories from fifty years ago, and he had been searching for his familiar memories, but every place had changed a lot. They seemed familiar but also unfamiliar to the father. Dad heard every attraction in Kinmen, but he had never visited any of them. He was so busy and worked very hard that the honor leave was not even used for a day. He returned to Taiwan after leaving the army. Through the local food and the stories told by the tour guide, we could tell from the father’s eyes that he was grabbing his memory piece by piece.

The tour guide told a story.

A veteran came back to Kinmen to find Atao, his girlfriend back in the time. He cried loudly when he found her...
He said, this was not the beautiful Atao he knew back then. The tour guide said that he had become an old man as well...

The daughters asked their father if he had “Atao” in Kinmen before. The father didn’t say anything, maybe he didn’t have one, or maybe it was because the mother was standing right besides...

The last stop was a little bit challenging because, as mentioned before the trip, the father didn’t like the wordy process and waiting in lines either. How to make their father successfully get the badge of the army when he had already lost his military service discharge order? With the guide of the local government, we finally found the unit where the father served, and successfully obtained the army badge of the year. The father suddenly felt so proud and satisfied. In the meantime, they gave him a bottle of commemorative wine with the inscription, "Thank you for contributing your youth and protecting Kinmen". There was also a red cloth written “The pride of Kinmen returns to glory” This red cloth was only for the real hero.
On the return trip, the daughters said that the father held the wine tightly, holding the badge, and would not give it to others. He said that he could hold it himself. I think this is his own glory.
This was a journey full of memories and missing.

[ The missing tour brought by the war ]

[ Separated by the war, the trip back to the hometown ]

[ A friend in need is a friend indeed ]

Let’s have a romantic trip!

Because both of them were heroic and kind-hearted people, the goddess of love in the hospital felt that they were meant to be together. The goddess decided to shoot the love arrow to them. The two souls then decided to spend their rest of life together, loving each other like they loved the people. This was a trip only for them, a sweet and romantic journey to the Maldives.

[ Honeymoon tour to the Maldives ]

All content published on this site that except the items shall not be the subject matter of Copyright Act that such as laws, orders, text of speeches, news releases and etc., please refer to the Article 9 provisions of Copyright Act the others all protected by Copyright Act including textual narratives, photography, pictures, sound recordings, images, and other information. No one may misappropriate, reproduce, transcribe, or distribute part or all of the content without the consent of the original author.